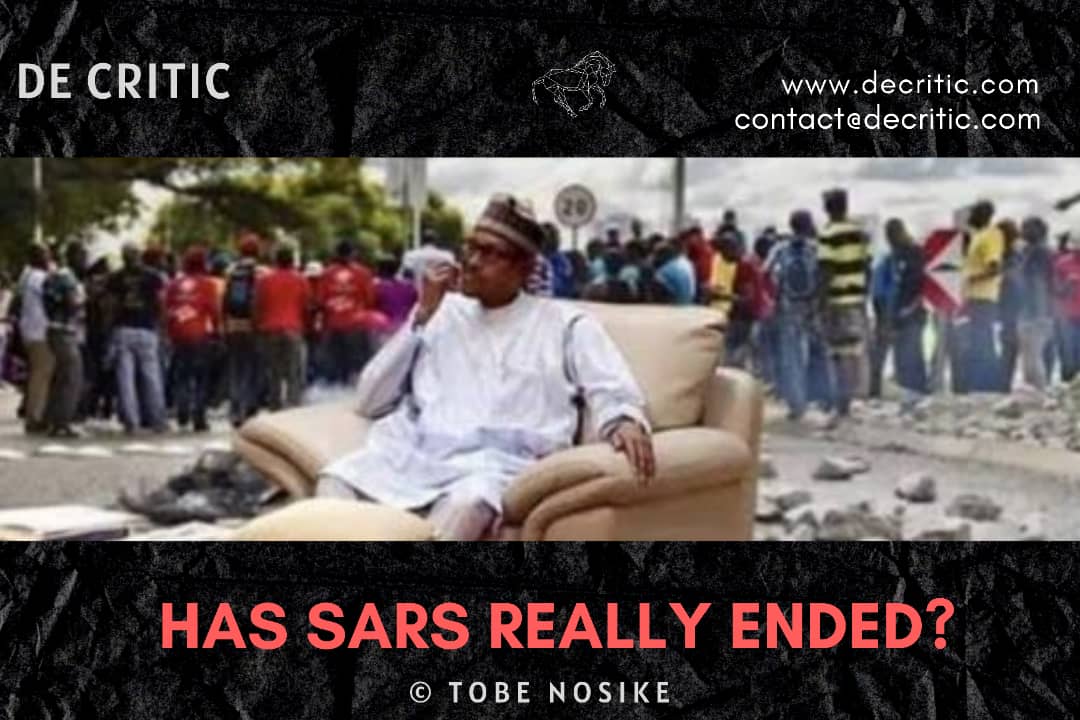 Tiwa Savage’s ‘Koroba’ was forte inside the car as I returned from work. The traffic was surprisingly light for a Monday. The evening was cool while the atmosphere buzzed with the #ENDSARS protests going on. Listening to Tiwa’s lyrics ‘I no come this life to suffer,’ I smiled at the obvious irony for it has always been the predicament of the average Nigerian to suffer. Not from war or an invasion, but from the constant denial of our basic human rights to the extent that those sworn to protect us are those whose bullets are found buried deep in our bones. Nigerians then are left to fight for their lives. The lowest of the low.

I went online to see what was happening on the hot streets of Twitter, and how the END SARS protest was going and also tweet my seventh END SARS for the day. I took it as a responsibility to tweet ‘END SARS’ ten times a day. I was particular about the END SARS campaign not because I have a history with them, but because of the people I know who do.

Ikechukwu the guy next door was beaten up because he had a laptop on him when the Special Anti-Robbery Squad – SARS stopped him and demanded to search him. He was labeled a yahoo boy and the cause of the many problems of Nigeria in the International face. Ikechukwu who tried to explain to them that he was a student, studying Computer science won himself a punch across the face and a thorough-don’t-be-silly beating that followed. He came home shedding tears like a girl whose heart has been broken by her first love.

It is a thing of joy that the youths have woken up from their sleep and have decided to take the bull by the horn. It is a greater joy to see Nigerian celebrities walk the streets, protesting and asking for the end of this police brutality. The people aren’t empowered, neither are they protected. The lack of value for human life in our country is disheartening and heartbreaking.

However, on Sunday 11th October, a statement was released by the Inspector General of Police stating that the Squad has been dissolved in the 36 states of the federation. He further said in the five things to know about the dissolution of SARS that ‘All officers and men serving in the unit will be redeployed to other police commands, formations, and units.’ That brings us to the question – HAS SARS REALLY BEEN DISSOLVED?

You do not cure a person of leprosy by taking him to the epileptic ward. He would go to the ward, and his leprosy will continue and he might end up infecting the epileptic patients with leprosy.

Redeployment of the Anti-Robbery Squad is not what Nigerians need. It should be ENDED. Not the usual yearly meaningless verbal dissolution of the squad, but an executive order, given and signed by the president ordering their immediate shut down. Do not take them to another section of the police force. These set of people are obviously not mentally fit to handle a gun. Talking about the police force, are those people earning below Fifty thousand Naira? Now the matter is becoming clearer. Why won’t they look for a way to earn more by extortion, bribery and corruption?

Nevertheless, I hope that these policemen know that the people whose bright future they extinguish are the same people fighting for a review of the salaries of the average Nigerian policeman, which in the end is the true origin of the blind envy and continuous bloodshed.