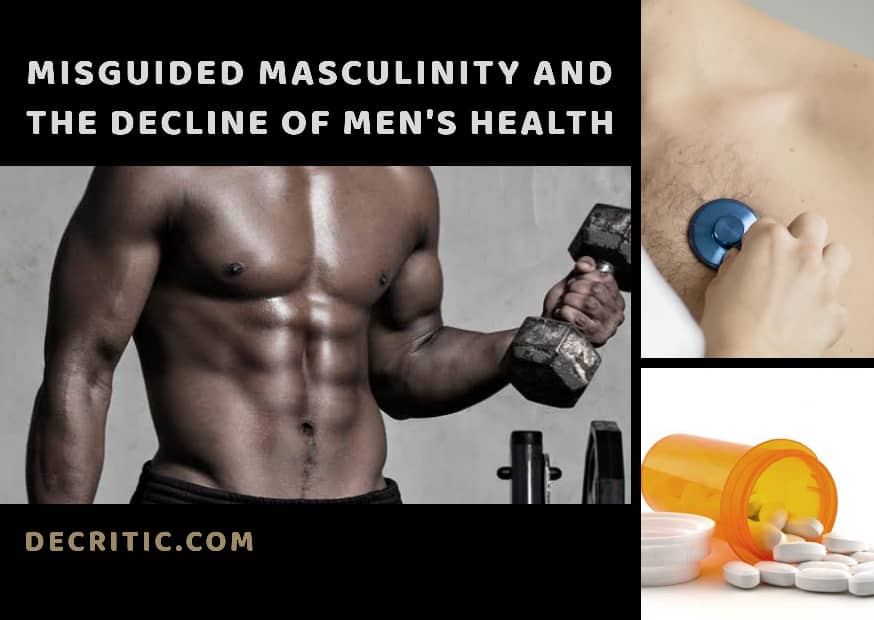 I did not inherit wealth from my father, so, it is prostate he can give me? Okey would say.

Like women, men are also fragile and vulnerable creatures, susceptible to a wide variety of health-related problems. But masculinity is not only a risk factor in disease aetiology, it is also among the significant barriers to mens consciousness of their health.

The masculine man does not get sick, but when he does, he does not complain about it and does not seek help until his entire system begins to shut down. Bodybuilders put their health at risk by using steroids, overtraining, and engaging in extreme dietary practices. They often sacrifice their health in pursuit of masculinity.

Men’s health is imperative but more than half of them seem to feel less concerned about it. They focus on the hustle and forget to check their health status. The man’s job is physically hazardous on average. Thus, greater exposure to these occupational hazards contributes to the higher rates of lung cancer and other work-related health challenges.

Men drink heavily and smoke incessantly and this contributes to the rate of liver and kidney diseases, accidents, suicide and mortality experienced by them.

Male drivers are considerably more prone to fatal motor-vehicle accidents caused by high consumption of alcohol which subbstantially increases their blood pressure. The man is prone to injecting drugs which contribute to male’s higher rates of HIV infection and resultant mortality.

Gender differences in diet may also play a role in men’s health. For example, health data in the United States indicate that man’s diet have somewhat higher ratios of saturated to polyunsaturated fat and men have had lower vitamin C intake on a per calorie or per body weight basis, and these gender differences in diet would be expected to contribute to higher ischemic heart disease mortality for men.

From a psychological perspective, the man relegates his health. The feminine gender visits physicians and goes for therapy when need be, but the male gender hardly has time for these, thus leading to the high rate of depression in men.

We have often heard of prostate cancer, heart diseases, kidney failures, and a whole lot of illness in men and these illnesses start surfacing in a man’s prime. Why then can’t we spend time on health?

Health has continuously been referred to as ‘Wealth’, but the big question is – why do men wait till its too late to seek this wealth?

Health is wealthMisguided Masculinity and The Decline of Mens HealthTobe E. NosikeWhy men neglect their health