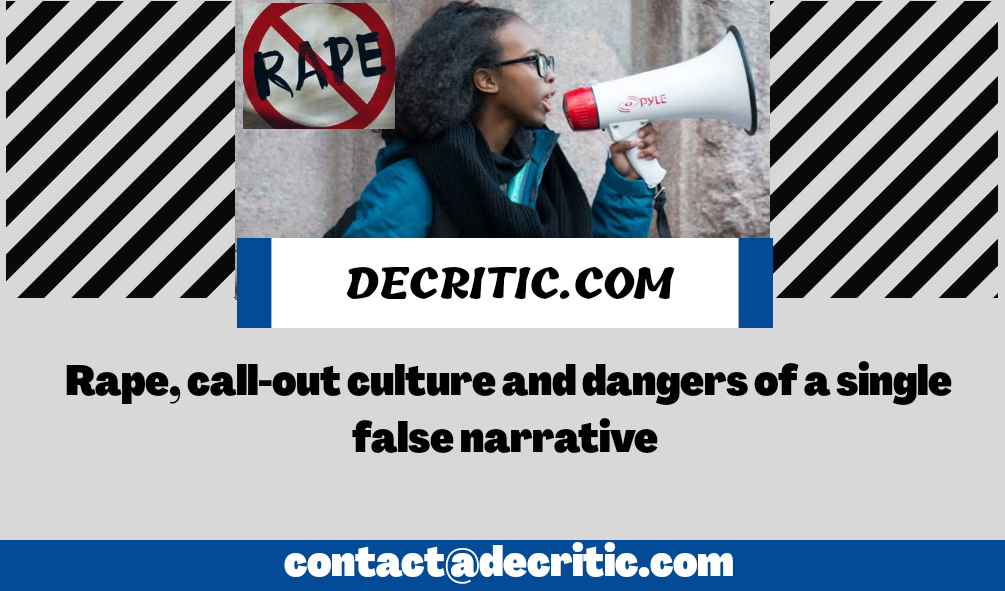 In June 2020, the world was literally in black. As the world battled the COVID – 19 pandemic and a nationwide demonstration against the incessant killing of African-Americans by the police force, here in Nigeria, a media uproar erupted as information of a rape epidemic came to light. This resulted in a frenzy on social media, as a protest against the brutal gangrape of Uwa began. It was indeed a revealing and emotional period, as a lot of women came forward with their rape stories. Stories of sexual exploitation and the plight the Nigerian womenfolk had to contend with to be at par with their menfolk. Then boom! Stories started flying in.

First, a Nollywood director, Victor Okpala, was called out for demanding sex in exchange for a movie role. Then it was Uti Nwachukwu, Dbanj, to mention but a few celebrities. Social media wars began, to discern truths from fabrications. In the comments section underneath such stories, Twitter and Facebook saw a crowd of Nigerians bashing and condemning the accuser and the accused, without getting the authentic gist of the story. We call them the magistrate court of public opinion, where the parties are either sentenced or acquitted, without a judge or any form of evidence.

The culture of calling out has been active for a long time and used as a tool for the oppressed, the weak, the marginalized, and those without a voice, to reveal the injustice meted out on them, as well as to change the status quo. That was the original intent.

However, publicly accusing someone of rape, without valid evidence to back the claim, has consequences so grave, that even if an accused is proven innocent, there is no coming back from the damaging effects caused. No legal remedy can bring that back.

In the case of Uti, the accuser immediately vanished after he declared his intentions to engage his legal advisers. The trauma he would have faced would by far outweigh the legal fees or retribution he would receive, not to mention the damage to his career.

Izu Madubueze was not as lucky. He committed suicide when he could not deal with the trauma of the alleged ‘non physical sexual assault’ leveled against him by a Twitter user (@nanichianese) who deactivated her account after reports came out that Izu rejected her advances in the past.

There is a belief that call-outs of recent times have been used to stir trouble, rather than highlight the ills of injustice. A call-out on social media should only be justified, if the accusation is true and the accuser has laid complaints to the accused, while the accused refused to reasonably settle the issue.

In the case of a rape callout, there is a need to have a full understanding of the implications of the word rapist. Before the word is freely used on a human, either publicly or privately, the accuser must ponder upon it, just as a rapist ponders on his/her actions before raping someone.

How does one bounce back from the stigma attached to these vices (true or untrue)? Heritage Bank had to suspend all forms of business activity with Dbanj, just because he has been associated with the word ‘rape’, however untrue it may be.

While there are no right and wrong ways to promote a call-out culture, dissecting our true motivations and reasons before offering such criticism, as well as the consequences of such call out, helps the call-out culture fulfill its actual intent, because by ganging upon an individual, especially in public, you are taking a high moral position, and inciting the public to public shame the individual, which is usually counterproductive especially where there is no substantial evidence to back up such a claim.

In the case of a traumatizing experience such as rape, where dialoguing with the individual is far-fetched, calling out a rapist should be backed by a true story. This way, we can reduce the number of suicides, and horrific experiences that can be propagated by a single false narrative.