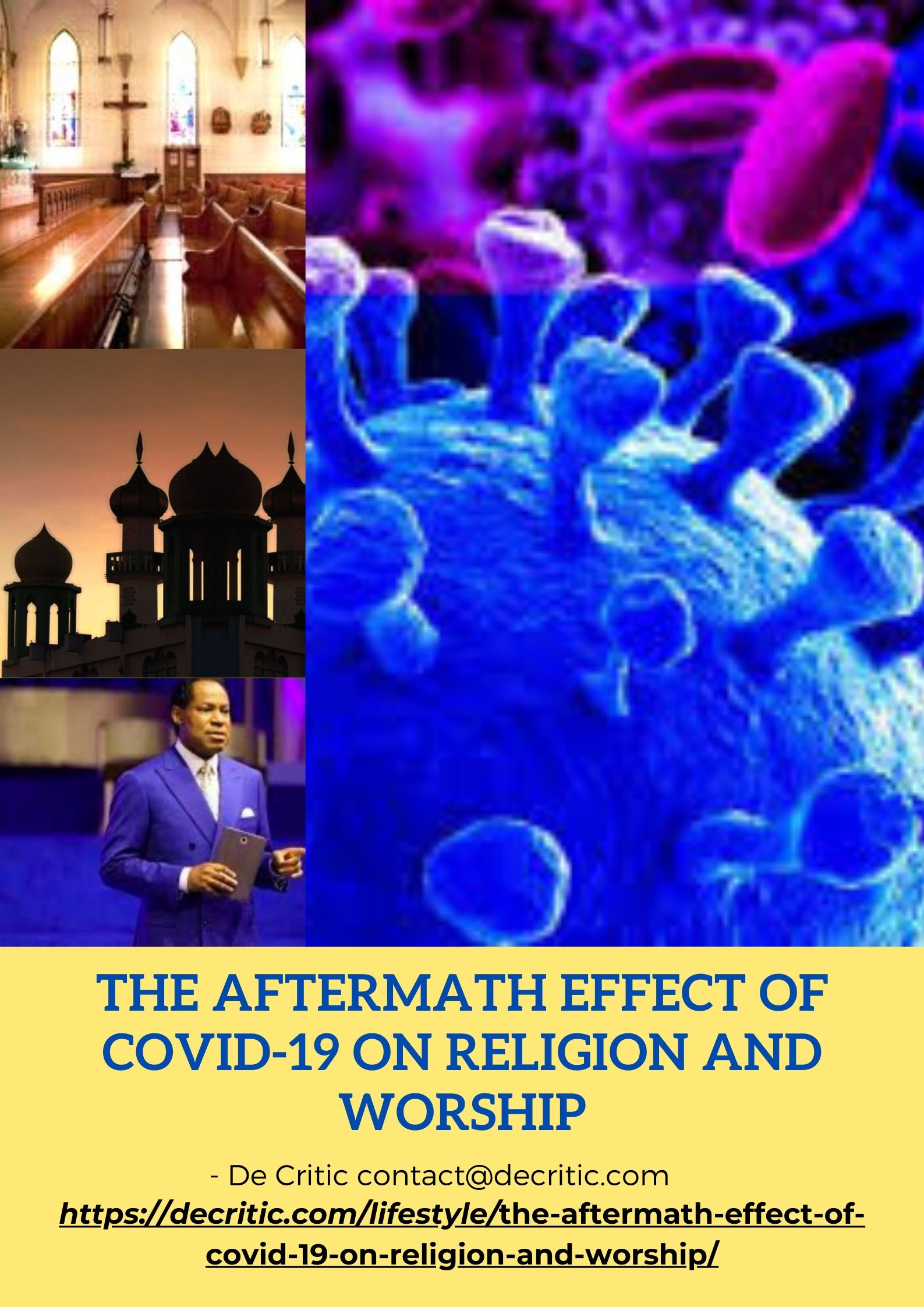 THE AFTERMATH EFFECT OF COVID-19 ON RELIGION AND WORSHIP

Churches, mosques and religious houses, holy places previously filled with the overwhelming presence of believers as they bath the walls with fervent prayers now lay empty, void of life in the face of the raging COVID-19 pandemic. With the heavy imposition of lockdowns, strict compliance to social distancing and the outright ban of social gatherings, religious activities were undeniably affected as all religious leaders were forced to close their gates to worshippers. Many have taken to worship via digital means. This article will examine the aftermath effects of COVID-19 on religion and worship.

Who will ever believe that Christians would stay in-doors and not be in the house of worship? Although this is not new in history. The admonitions not to miss church will no longer hold a strong effect on worshippers, as religious leaders are now telling its members to stay at home. What an irony. At first, it proved difficult with Mosques, but now, not so. Even some Catholics who believed that to miss Mass is a sin that requires confession will have reasons to re-examine that idea, after all, it is doubtful whether it is a doctrine of the church.

A psychologist, Ella, admits to us, that after the lockdown, people will be lazy to go to religious houses as they were once used to. Religious houses will no longer be Mandatory but necessary. Is this good or bad? Maybe Africans need to reduce religious fanaticism and embrace a little more of reality on how God truly works. But again, this may have a great impact on the morality of the society.

TECHNOLOGY, THE NEW HOUSE OF WORSHIP?

Many worshippers are now exposed to various possibilities brought about by fast-evolving and global technology. Emmanuel remembers in 2018 when he came back from Church and asked his friend Jude ‘you didn’t go to church?’ he replied ‘Hmm, I kind of. I followed through Mass on my phone’. They paused and started laughing. They reasoned after, that it was perhaps actually convenient save for the choral music, communion and shaking of hands (expression of love) that will be missed. Little did they know that the world will one day take to digital Mass.

Chinenye had a conversation with the Mother during the lockdown, who noted that she, for the first time, gets to see what truly goes on the alter at a close range.

Catholics are now getting used to spiritual communion, Christians are getting used to podcasts and digital videos (Some churches like Christ Embassy are kind of used to it, but they still attend church to use the projectors). Catholics, Anglicans and Methodists who require an ordained chief celebrant to lead the church service now uses a single videoed service followed by thousands and millions of parishioners from the comfort of their homes. Music is performed by a single- or 3-man choir. The physical communion is replaced with a spiritual one.

Although many are getting very comfortable with this new change forced upon us by the pandemic, many argue that physical communion can never be compared to or replaced by spiritual communion and it is easy to get distracted while following a service from home. Also, some stressed on Proverbs 27:17 – Iron sharpens iron, and a man sharpens the countenance of his friend – which explains the importance of communism.

For the Muslims, the rise of the pandemic brought about a complete halt to the Jumat celebration on Fridays as there was neither intention nor action taken to go digital. However, this had little or no effect on their daily prayers. In an interview with a Muslim friend, she said, “Before the pandemic, a majority of ladies do pray at home. It is mostly the men that go to the mosque. Since the onset of the pandemic, most mosques have been closed but the one on my street has been reopened. Only 20 people are allowed inside the mosque while the rest pray outside. It has never been compulsory for us to take our daily prayers in the mosque. It can as well be done from home”.

SUBSCRIPTIONS TO RELIGIOUS MEDIA HANDLES ON THE RISE

Funny enough, religious houses needed no advertisement from marketing agencies. People voluntarily took to following their Church media handles to maintain a spiritual touch.  Various religious digital channels were rapidly created, and existing ones saw an explosion of subscribers. Eventually, a place of worship was created in every home who received the change with open arms.

RATE OF OFFERINGS, TITHE, ETC, ON THE LOW

While Religious houses are spending a lot to keep the spiritual bond with its members and subscribers, the aspects of offering and tithes are no longer effective. Although some Christians still send out money to their pastors and priest for upkeep, some sponsors contribute to the digital worship, but many no longer pay tithes and offerings and the religious houses can understand as the lockdown has an economic impact. No one knows how bad it will be after the lockdown, but economists are saying it’s going to take years to recover from the economic impact.

THE FAITH IN GOD, Threatened or Strengthened?

Many have wondered why God maintains silence while ‘few bad men’ take over the world if the conspiracy theory is true; some have expressed dissatisfaction over God’s silence on the COVID-19 disease. On the other hand, many are saying this is God’s sent to warn us all; some say these are signs of the end time.

However, we noticed at first that many are taking it slow on their vices and trying to live an upright life, but now, many are returning to their normal lives and choosing to believe that this is a normal phase.

It was Denny Crane who answered Alan Shore in the famous legal tv series – Boston Legal, that if God exists and you have lived your life in total disregard of his presence and laws, then you are so fucked! He said – practically, it is wiser to believe than not to.

After all, what are his commands? That you work and prosper; that you be fair and good in all your dealings; and that you believe you will not be in hell but have life in heaven. What is there to resist?

Do you like how we write? Encourage us with a comment below; engage us for your copywriting or any sort of writing; Drop an ad with us. And do not forget to subscribe below.