The President Harassed Me – step aside for investigation 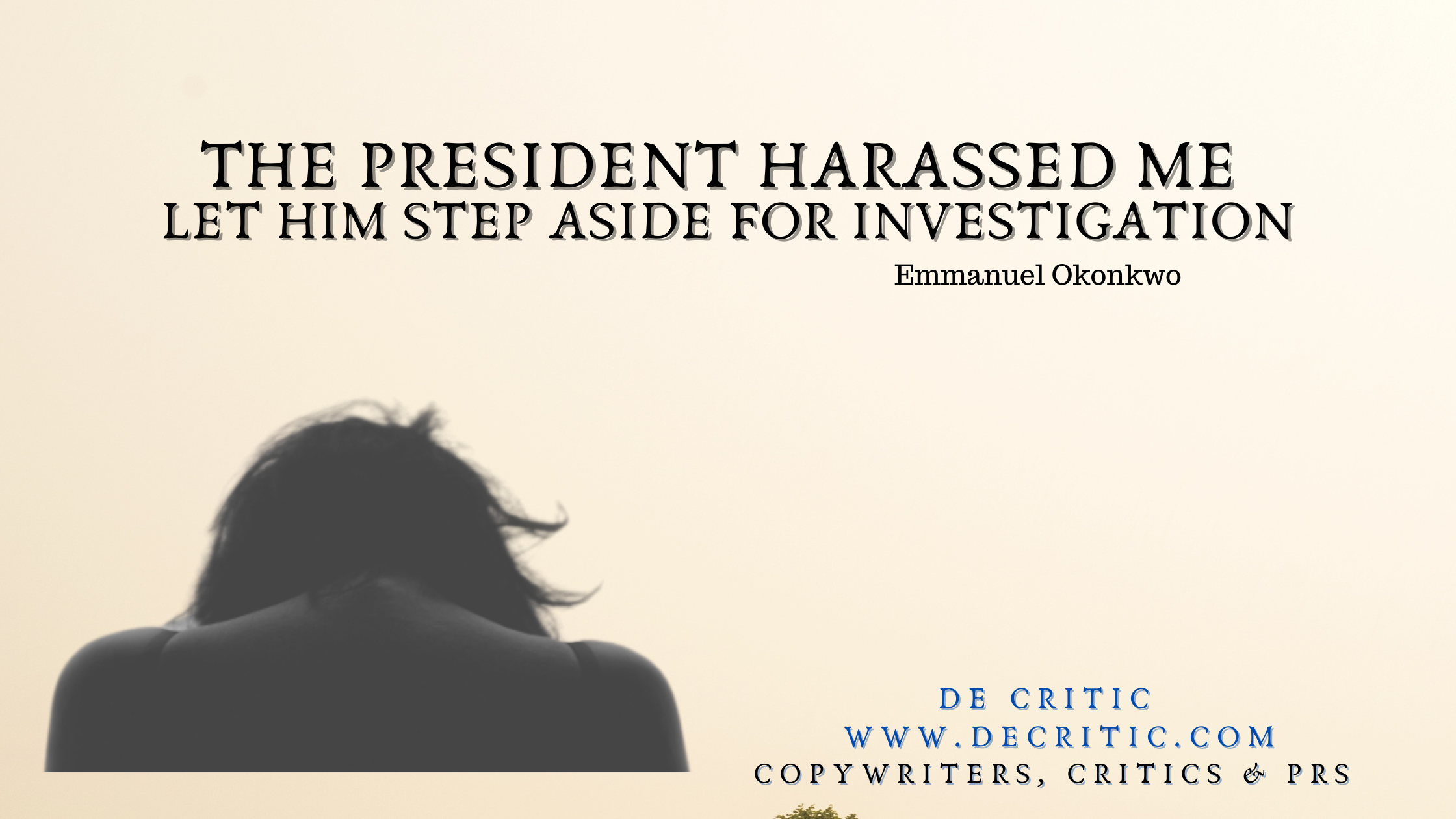 My Dad had insisted that I send the parcel to him personally as the parcel must not fall under the wrong hands. ‘It is a matter of national security’ he said. I came that fateful afternoon and found him in his lounge. ‘Oh common, seat, and have a drink with me’ he insisted. Out of respect, I sat down… the president harassed me. See, I have evidence – the president must step aside for investigation…

With the above kind of story, it is now the norm and perhaps the culture all over the world, that when persons in leadership are called out over an immoral or fraudulent behaviour, the authorities would demand that the person step aside before investigations. This writer will show how wrong that convention/norm is and proffer a better way for companies, societies, countries, to handle such matters.

Recently, in September 2020, Greg Patton, a professor of business communication at the University of Southern California Marshall School of Business, was removed from the course he taught for many years because students complained that he used a word in Mandarin that is very similar to the Nigga word, and they are offended.

Trevor Noah carried an investigation with a Chinese native who said such word is used when trying to recollect i.e. ‘hmm, ehhh, ahh what I am saying is…’. Thus, the Professor’s name is defamed, or his position shamed because the word he used while trying to explain something in Chinese, signifies a hate word in English. This is ridiculous.

Let’s talk about Presidents. Would a president be asked to step aside before any investigation? It would appear we are hypocrites even in our judgemental perspective. Bill Clinton, for instance, was accused of immoral conducts and subsequently perjury and obstruction of justice. Investigations were carried out while Clinton was in office and not until the investigations were concrete did the Congress made a move for impeachment. This process seems like a logical thing to do. But I suppose one will be worried over –

The Obstruction of Justice While in Position

This argument appears cliché. It is not enough to ask someone to step aside pending investigations. That very process is a judgment, a defamation, a condemnation and more likely than not, it can be manipulated by opponents as a way to remove a standing leader.

The Constitution is to the effect that no person’s right is to be breached except as provided by the Constitution or until a court of competent authority finds the person guilty.

If the constitution of a group or company does not provide for stepping aside, then, that should not be invented as it is wrong and actually a breach of the person’s own fundamental right to a proper trial. We must hold our doubts until proven. The media is not a trial court neither is it equipped with the skills of trying matters. For what it is worth, psychologists have recorded quite a number of abnormal personalities in the media. There is a reason why courts are established.

When anyone, including a president, is accused of anything that can warrant removal from office, an independent investigation panel – a watchdog, should immediately be set up while the accused be given the benefit of the doubt to remain in the seat. Every decisions and correspondence must be copied and go through the panel who will have oversight and investigative powers. Any single act made without the knowledge of the Panel, having a likely effect of obstructing justice, will then amount to stepping aside. That way, the fear of obstruction of justice and abuse of power is addressed, while the rights of the accused remain intact pending conclusion of investigations and final judgement from the appropriate authority.

The call-out culture and pre-removal antics, if not checkmated, is very dangerous and have an overreaching effect of defaming a person for life. See how Gregg Patton’s name would remain on the internet as a perpetual example. See how Biodun’s name pops up anytime rape in Nigeria is googled, despite the fact that he was exonerated.

If not checkmated, it means that any person can wake up any morning and call-out anyone and the person called-out will be stripped of his rights and privileges and defamed with an immoral innuendo for life. If the aim is to remove the person for a day and get something passed, that could be a strategy. The dangers are endless. What is your thought about it? I would like to see it in the comment box below.