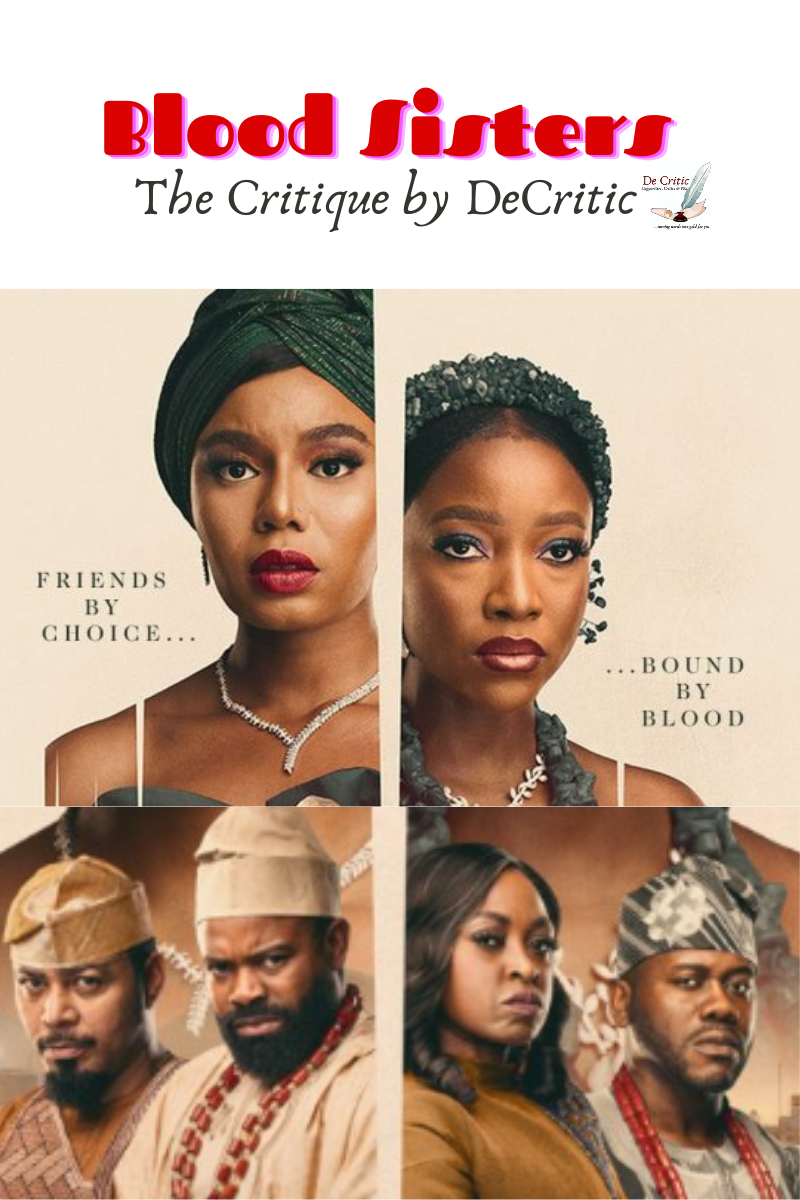 Blood Sisters Is Not What They Say It Is…

While tweeps went into hysteria about the newly released Netflix Nollywood crime drama, Blood Sisters, I believe Blood Sisters is Ebonylife’s attempt at redemption for the abysmal Chief Daddy 2. This writer has one question –

Were we so blown away by the cast’s flawless performance that we turned a blind eye to the screenplay’s flaw?

Some casts and scenes could have been written off totally. For example, the garage scene with the hotel worker, what was that? To throw in big names Zack Orji had to make a quick appearance – if the idea was to intrigue us, it failed.

Why would an assassin paid to kill someone come to his victim’s event with a face that screams, “I am here to kill you?” LOL. What was that Hollywood playbook kitchen chase? The Director seems to forget that in Nigeria, if such a person shows up and also made through the kitchen with such a face, then the whole party will stop and focus on him. Is drama not supposed to present the true state of life? Common Nollywood!

Talk about the policeman – Inspector Joe AKA Chicago (Wale Ojo) with his irreconcilable accent. OMG! How does a 20years Chicago trained Policeman investigate like that? Based on assumptions and what his nose smells. Even when the CCTV shows you the culprits, you try to link another person to the crime. Going to someone’s house in the middle of the night to accuse them without evidence?

At least the screenplay was not a recall from the earlier Nollywood Blood Sisters featuring Genevieve and Omotola.

Leading a stellar cast, Nancy Isime and Ini Dima-Okojie, who stared as Kemi and Sarah respectively, came prepared. Everyone brought their A-game, and those who didn’t have an A-game tried to force it out.

The powerful performances are put on by Ramsey Nouah (Uncle B), Kehinde Bankole (Olayinka) and Genoveva Umeh (Timileyin). While Genoveva convinces us that she understood the assignment, especially with her entry scene at the dinner, Bankole takes a gentle approach to villainy and personal winch to her lily-livered husband Femi (Gabriel Afolayan). Demeyin Okanlawon (who played kola Ademola, the abuser) was very much on point and has distinguished himself.

Uncle B! Ramsey Nouah, playing Uncle B, a personal bodyguard to the Ademolas, was excellent. Although, my fellow critic, Emmanuel Okonkwo thinks otherwise. Emmanuel Okonkwo believes the personality of Ramsey Nouah does not fit the part of a bodyguard and he tried too hard to fit the role. Emmanuel believes the directors were confused by Nouah’s outlook in Merry Men and Living in Bondage.

I believe Ramsey Nouah commands such a strong presence in every scene of Blood Sisters that he appears, even though he says nothing in those scenes. His facial expressions spoke louder than words. As a matter of fact, Ramsey did not utter up to thirty words in the entire series. But then again, for a glorified bodyguard, why was he the one running around town searching for the ladies? He should have boys at his beck and call.

The matriarch of the Adebayo family (Kate Henshaw-Nuttall), asides from the annoying capes she wore throughout the series, deserves applause for her enthralling performance. She nailed it.

And of course, no better person would have played the corrupt DPO better than Segun Arinze, with his bulging eyes and crooked ways in films.

As for the Mr/Mrs Duru, OMG, they nailed it. I expected nothing less from old veteran actors who have been around.

Now, it will be evil not to acknowledge the lighting, production design, set decors, location choices, costumes and the overall aesthetics and visual elements of the series. They were top-notch.

Undoubtedly, Blood Sisters presents a better screenplay than what has come out of Nollywood in recent times. However, was it flawless? I don’t think so. Is it what the time? Yes, it is.

Now Let’s Look at The Other Picture Called Life

“So you’re telling me that you want to let go? You’re willing to let go of everything because of one slap? Sarah, one slap! God forbid. Do you have any idea of the sacrifices your father and I have made to place you where you are today? Look at me. A few years ago, did I look like this? It’s because of money. That is what money does. So you think your father’s business would have survived a day without the support and help from this family? So, you’re not the only one involved, the only one to think about in this situation, are you? Wipe your tears. Let your face glow as the bride to be.”

This is what a mother (Mrs Duru) says to her daughter (Sarah), who tells her that she wants to walk away from her abusive fiancé, Kola.

Whenever the sun sets, we hear cases of domestic violence. We often ask why these victims don’t walk away until it’s late. Well, here is one of the reasons. Some people remain in abusive relationships because their families stand to lose everything. Everything! Another disturbing reason is that some of you think you can change your spouse. You would have seen those signs, but you ignored them. The minor hits, the tiny slaps that you assume will change. It may interest you to know that some habits never die.

And when Kola went missing, what did Sarah’s father have to say?

“If this marriage doesn’t happen, will it affect the loan? Honestly, we really need that money. Our lives depend on the money.”

Blood Sisters is not what they say it is; it is an eye-opener to domestic violence and how the rich get away with it. How a mother is willing to cover her son’s tracks of hurting women.

Kola was a monster; even his best friend was oblivious of it. But guess what? There are more unique monsters out there. And yes, indeed, those closest to you are always the last to know about your demons. Always know when to walk away from an abusive relationship. It is okay to walk away. It is your life. Walk.

DeCritic is Nigeria’s leading copywriting and PR agency. Our Critic department critiques brands, movies, music, and lifestyle. Do you want an unbiased review or critique? Or do you want a scriptwriter or wish to hire a storyteller? Chat with us now.

Edited by Emmanuel Okonkwo
Written by: